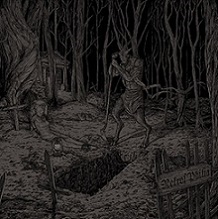 Lord of Pagathorn performs somewhat old-school black metal with a few hints of thrash metal added for good measure. The band was actually formed way back in 1992, but Nekros Philia is the band’s debut album. A couple of demos were released back in 1993 and 1994 and then no outputs were spawned again until 2010. Anyway, the sound/production is pretty rough around the edges and one gets the impression that this could have been recorded back in the mid 90ies, but given that the band was founded back in 1992 that is hardly a surprise. There is absolutely nothing new, original, or innovative to what these guys are doing. I am not saying that Nekros Philia is altogether bad or that it sucks, but in terms of moods and atmospheres I think the album as a whole is simply lacking and comes across a bit uneven. Some strong riffs, convincingly grim vocals, and melancholic parts do appear from time to time, but in the overall perspective nothing truly stands out. Occasionally the album peaks my interest, but that happens way too rarely, and Nekros Philia unfortunately ends up a tad too mediocre for my taste.