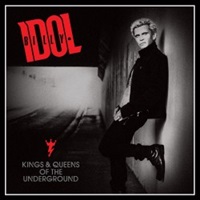 From punk pioneer to rock star, veteran Billy Idol is an icon in the music industry. Platinum albums, sold out concert tours, movie appearances – he truly lived the sex, drugs & rock and roll lifestyle of the 1980’s – and is alive to tell those tales today. "Kings & Queens of the Underground" is his first new studio album in almost a decade, and even in his late 50’s still has a lot to say to the world. It may be more restrained, thoughtful, and song driven, but you can’t deny the integrity of "Bitter Pill", the raunchy throwback first single "Can’t Break Me Down" or reflective, morose "Eyes Wide Shut".

Teaming up with guitarist Steve Stevens and gaining production help from Trevor Horn and Geoff Downes, Billy Idol continues to be put in the best light possible for 2014. Yes, you need to understand he’s not going to re-create "Rebel Yell", but the complex character still comes through on this 11 song release. Autobiographical material like "Postcards from the Past" or blistering "Whiskey and Pills" paints a picture of a warrior, pouring out his reality on the page of a musical portrait.

Long time aficionados will be very pleased with this record, and I think those who want a little peak into his world but have feared his aggressive nature in the past could be pleasantly surprised by his essence and love for various genres of rock. Highlights? "Save Me Now" has that subtle, dark electronic groove and Stevens-guitar accents that are an Idol favorite, plus the title track ballad is one of his most emotionally rich compositions to date.

Welcome back Mr.Idol – expect many sold out theatres on the impending tour.