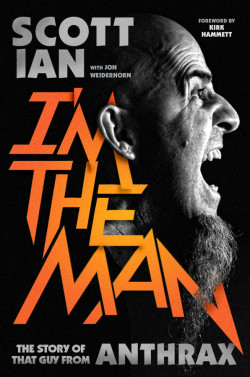 I will be the first to admit that I have never been a big fan or admirer of Anthrax as such, but I do like some of their early material, and they were one of the very first metal bands I ever came across way back in the day before puberty and pimples and all that cool stuff sneaked up on me and made me unpopular with the girls and blew my self-esteem. So, in other words, Anthrax had just put out Stomp 442 when I started listening to metal, but I do prefer the first 2-3 records of theirs to the rest of the band’s catalogue. Anyway, I was so fortunate to receive a promotional copy of Scott Ian’s upcoming autobiography, which will be released in October, and I might as well start of by telling you that I really, really like this book. Let’s have a closer look at why I like it, shall we?

I’m the Man – The Story of That Guy from Anthrax not only details the story of how Anthrax came to be and survived for thirty years, which is an interesting and inspiring read in itself, but, more importantly, it takes us through every conceivable aspect of Scott Ian’s life outside of Anthrax as well. Sure, we get to read all about his other musical projects such as S.O.D. and The Damned Things, and no stone is left unturned in this book when it comes to Anthrax, but what I enjoyed reading the most was how his childhood and upbringing as well as his marriages and personal relationships influenced and shaped him as a person. In a way, the book beautifully illustrates how his personal life and the evolution and creative outputs of Anthrax were somehow interwoven and connected, for better or worse, you might say. Scott Ian is brutally honest and tells it like it is, to the point where one is sometimes left feeling like a voyeur or something like that because it gets so personal and intimate in places, but is that not what makes for a great read, ladies and gentlemen? I especially loved the chapters that touched on his obsession with KISS and how comic books, sci fi movies and NWOBHM bands such as Iron Maiden inspired and influenced him. Also, the beginning of the whole thrash metal movement and underground scene in the early 80s as well as his interactions with Metallica, Slayer and Megadeth and so on are both funny and moving to read. Speaking of moving, the chapters that focus on his childhood and dysfuntional home life as well as his upbringing in Queens and his love of baseball definitely stand out  in my opinion. Before I forget, I also need to point out that the chapters in which Scott Ian reminisces about hanging out with Dimebag Darrell and being on tour with Pantera are pretty damn hilarious.

I’m the Man – The Story of That Guy from Anthrax is a fast-paced, funny, revealing and at times tragic account of how a geeky boy from New York made it in the world of music and just how thin the line between devastating and triumphant really is, not just in the world of music, but in life in general. The book strikes a really nice balance between the uplifting aspects of being in a metal band as well as all the bullshit, backstabbing, setbacks and pain that ensue from it all.

I am of the opinion that one need not be a fan of Anthrax, S.O.D. or even The Damned Things in order to enjoy this book. It is so well-written, humorous, heart-warming and even downright insane in places that one cannot avoid being moved by it in one or more ways. As I pointed out earlier on, I have never really worshipped Anthrax or anything like that, but I truly enjoyed this autobiography and had trouble putting it away whenever I was reading it as it is simply a captivating and facinating read. Highly recommended!