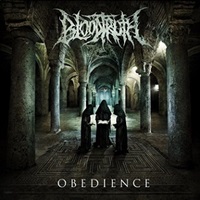 Brutal death metal purveyors Bloodtruth unfurl their debut album "Obedience", and those who choose to succumb to the savagery will not remain in the same state after each 33 minute playback. This is unrelenting, blast beat heavy music thrown over the top by dizzying neck runs and amazing stop/ starts – while the vocals are semi-growly yet surprisingly discernible. "Coerced to Serve" and "Surrounded By Blind Bigots" swarm aurally like thousands of killer bees never giving up until they sting every human in sight. Only the tranquil 53 second "Subvenite" and the initial Gregorian chants for the aforementioned "Coerced to Serve" provide calmness – otherwise the four-piece pile on the riffs and aggression, reminding me of Origin and Krisiun during their early years.

Stefano Rossi Ciucci pushes tight arpeggio-oriented lead sweeps in small 4 bar measure windows – while vocalist Luigi Valenti rips out the anti-religious, philosophical topics on "Quench Your Thirst" and "March of the Fools" that should turn any frustrating, stressful situations into more tolerable outings. Speed for speed sake can be a tough sell if there aren’t subtle breaks or transitions to let things settle in – fortunately for Bloodtruth, the rhythm section knows that there has to be those instrumental moments where they set up the next sonic boom, flooring the competition in lacerating fashion. Even bassist Riccardo Rogari gets a little highlight action on the closing title cut – running up and down the flagpole in a progressive manner.

Originally starting as a side project for 2 Fleshgod Apocalypse members who have since left, Bloodtruth proves that you can produce hyperspeed death metal without being over the top in technique. "Obedience" levels you instantly.