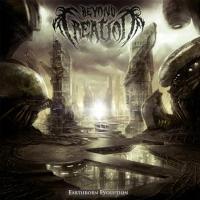 ‘Earthborn Evolution’ is the second full-length release from Canadian technical death-metallers Beyond Creation. I’m not a great fan of Canadian DM in general so I am happy to report that the sound of ‘Earthborn Evolution’ owes more to German acts Necrophagist and Obscura than it does to fellow North Americans Cryptopsy and Gorguts.

A look at who does what in the band will probably go a long way to describing what kind of DM they play:

Suffice it to say that Beyond Creation are not ones for doing things the easy way.

Where similar bands often fall down for me is that they get stuck in endless loops of breakneck arpeggios. It becomes all about their musical abilities. With Beyond Creation, the songs themselves remain top priority, meaning that although your ears get the full-technical workout, there is still enough musical meat in each track to keep you satisfied. Plus there is plenty of variety on offer in terms of tempo. Ultimately though, ‘Earthborn Evolution’ works because there is something likeable and memorable around each corner. The bass sound might take a bit of getting used to as the warm jass-fusion tones are a little unexpected but at least you have been warned!

Roll out your exercise mat and get ready for some aural callisthenic.