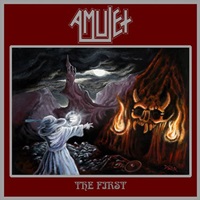 Checking out previous work from this London, England quintet, you’ll notice an underground theme running strong. Their first demo "Cut the Crap" in 2011 would be a 4 song, limited edition cassette release. Two years later we get DVD footage from those sessions. And here we have the debut album – a 13 track effort that has a lot in common to the heritage of NWOBHM. In all aspects of primitive production ethics, raw energy, pounding bass, a punk/ speed riffing outlook at times, along with a vocal delivery that is as rabid as it is fierce, almost ready to go off the rails at any given moment.

Opening in "Bomber"-like Motörhead fashion through a double bass Dave Sherwood flourish on "Evil Cathedral", the Amulet philosophy is pretty simple: keep those head banging, traditional oriented riffs coming, throw down the occasionally bluesy/ wah-wah oriented lead break, and make sure that the melodies and choruses are equally engaging and easy to grasp on the listeners part. Vocalist Jamie Elton has an eerie vibe to his voice: partially reminding of old Paul Di’Anno on the spooky "Glint of the Knife" or the 70’s Judas Priest oriented "Black Candle". Guitarists Heathen Steven and Nippy Blackford wheel and deal in a Saxon meets Angel Witch manner on the gallop fueled "The Gauntlet" while conjuring up their best Mercyful Fate meets speed/punk outlook on "Mark of Evil", unafraid to twist on a dime from balls out to standard devil’s horn chord combinations.

Many will think that a lot of younger bands are jumping on the old school / retro style because of its current upswing in media attention and popularity. As long as bands like Amulet stick to the music aspect first they need not worry, as "The First" should not be the last we hear from this fine group. Denim and leather clad individuals who seek out metal’s early days – here’s another obvious successor to keep the genre kicking