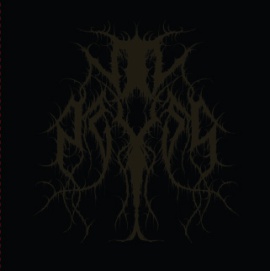 Nil Abyss is an Australian outfit performing somewhat mid-paced, simple and and hateful black metal with a very raw edge to it, and this 4-track release of theirs came out on the ever awesome Regimental Records some months ago. I have very little info on the actual band itself and I have no idea how many members it consists of and so on, so let us cut straight to the music itself instead, shall we?

Musically, the 4 songs that constitute this 22-minute EP are all pretty straightforward, ugly and lo-fi. There is absolutely nothing original or innovative to what Nil Abyss do, but that does not mean that this is a bad or an entirely uninteresting release. The whole thing has a very bleak and nilistic quality to it that I dig in a rather strange way. The atmosphere is downright nasty in places. However, the songs do require a few spins before they start to sink in as they are not exactly catchy or easy to lose oneself in the first few times one listens to them. Whether Nil Abyss will work for you is very much a question of what kind of mood you are in, so approach this with an open mind the first couple of times you spin it. I am not utterly blown away by it, but I am slightly attracted to it…in some weird, undefinable way…