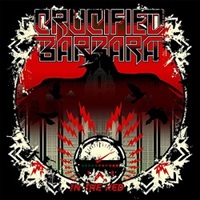 In life, you need the yin and yang between serious pursuit of one’s career and then time to just relax and let loose through your hobbies and outside interests. Sweden’s Crucified Barbara since their 1998 start aim to provide a soundtrack of hard rock/ metal that doesn’t command intricate exposure – just raw, down ‘n dirty licks, steady grooves, and vocals that have a melodic twinge to their punk/metal veneer. "In the Red" is their fourth studio platter, an 11 song document that in just under 40 minutes reminds you of what made The Runaways special if taken through a Motörhead filter – often feeling comfortable at a mid-tempo anthem pace while the guitars provide dual levels of catchiness and echoing counterpoint elements that build the hook and energy for maximum head banging appreciation.

Guitarist Mia Coldheart handles the main microphone responsibilities, and she has that raspy grit that recalls early Girlschool or Joan Jett throughout "Electric Sky" and the rhythmically swinging "Finders Keepers" that has a child-like charm during the chorus. Klara Force shares axe parts with Mia, and they keep their eyes firmly on simpler 3-4 chord structures, accenting their work through harmonic sections that instantly grab your ears – check out the Thin Lizzy-esque "Do You Want Me" or stoner rock vibe within "To Kill a Man" for their crisp team execution. Bassist Ida Evileye and drummer Nicki Wicked provide the bottom end groove in a tandem, stripped down platform – as the best in this genre allow feel to carry songs over flashy intricacies.

Crucified Barbara live for the stage, and I think the lean aesthetics for "In the Red" epitomize this philosophy – keeping studio tricks to a bare minimum. When the band does through an extended solo in the energetic "The Ghost Inside", they keep things bluesy and focused on the main riff parts for sensibility and continuity. When I need to let my hair down and just enjoy music for entertainment sake, this record would definitely be one of the first I turn to.