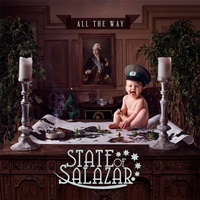 STATE OF SALAZAR – All The Way

West Coast / AOR/ Arena oriented melodic rock is probably considered the ultimate ‘feel good’ style – shimmering harmonies, bright chord combinations, and up beat tempos are the hallmarks in this genre. What’s nice to know is there are younger musicians (especially in Europe) willing to create new music inspired by the heydays of the 1980’s. Coming from Sweden, State of Salazar is a quintet that started in 2010 when five students attending music school felt the time is ripe to play rock music that can appeal once again to big arena rock audiences. Their 2012 EP (interestingly entitled "All the Way" also) gained a decent buzz through the magazine and blog community, leading to this debut album through Frontiers Records.

Spending a solid year on the songwriting and recording, the 12 songs on this record are very special indeed- bringing me back to a lot of pinnacle moments in AOR/ West Coast rock. Peter Cetera-era Chicago for instance comes up on the beautiful, moving ballad "Love of My Life", while Journey and Toto come up on the energetic, uplifting opener "I Believe In You" that you can almost picture being a part of any "Karate Kid" 80’s movie soundtrack. Expect melodies that rival a lot of Bill Conti meets Europe brilliance – Joey Tempest would be proud of Marcus Nygren’s lower to high register and ease of note soaring on the title cut as well as the playful semi-rocking "Marie".

There are also times where the musicians get to flash a little bit of their obvious talent – keyboardist Stefan Martenson on "Catastrophe", guitarist Johan Thuresson through a bluesy solo on "End of Time", or drummer Kristian Brun during some of the fill flourishes on "Adrian". But overall the five-piece really work hard and keeping the focus on immediate, great vocal or musical hooks and driving them home with choruses that you’ll be easily singing along to for that summer drive or making it through cold winter nights.

"All the Way" is a tour de force, showcasing a young band who give reverence to the past while writing solid, catchy material and ballads that prove the legacy of West Coast/ AOR/ melodic rock. State of Salazar should be the newcomer of 2014 and a future headliner to watch for in the coming years.