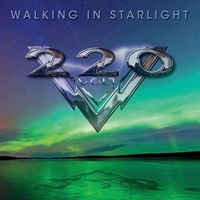 Childhood confession: a lot of times when money was tight, I’d make blind purchases at local tag sales and flea markets to fuel my rock and metal desires. My first exposure to this Swedish melodic hard rock/ metal act would be through that method, as I bought "Electric Messengers" on vinyl in the 1980’s from a dollar bin at a flea market vendor table – and proceeded to be floored by this effort. Realistically it was a compilation of early albums like "Mind over Muscle" and "Power Games", but their sound had a lot of that early Rainbow meets Europe attack, prime for consumers who needed more Euro-melodic metal.

Closing out their initial run in the early 1990’s when their hope for an American breakthrough fell off, I purchased the posthumous "Lethal Illusion" record from 1997, which while satiating my desire to hear more material, was an overall lackluster effort in terms of a kitchen sink songwriting approach. So upon hearing 220 Volt finally releasing a new full-length studio album with 3 key members (guitarists Mats Karlsson and Thomas Drevin plus drummer Peter Hermansson) and new vocalist Anders Engberg (Section A, ex-Lion’s Share) my anticipation was high that the band would click on all cylinders. Especially reuniting with producer Max Norman for mixing duties on five of the album’s 13 tracks.

Once the title cut kicking into gear, the softer guitars moving subtly into Anders Joe Lynn Turner-esque delivery, I knew things were going to be more than all right for 220 Volt in the current scene. There’s just something magical when musicians key in on the right chord strokes, solid tempos, multi-part passionate vocal harmonies during the choruses, and spirited instrumental lead breaks that weave texture, emotion, and maintain a consistent point beyond endless ‘show off’ or ‘shred’ capabilities. You get the up-tempo, blood pumping numbers where Mats and Thomas elevate their early roots to a current level like "System Overload" and "Alive", bluesy, catchy anthem-oriented tracks such as "Take a Good Look" or the guitar/drum symbiotic "Get Me Out", and the occasional moody ballad that gives the quartet a chance to showcase tender textures in the genre, like the fabulous closer "Guiding Light".

For those not in the know in terms of 220 Volt’s sound, I would place them in the Rainbow meets early Europe category, along with a little bit of that Deep Purple / Whitesnake chemistry thing going on. Keyboards get occasional air time, but never sacrifice the heavy metal/ hard rock guitar foundation – and Anders is a premiere vocalist perfect for this edition of the band. Highlights change by the day: "Broken Promises" has that immediate groove/ hook combination, while "Through the Wastelands" screams early 80’s Judas Priest and should get healthy air guitar simulations playback after playback. I don’t feel any filler tracks out of the 13 on "Walking in Starlight" – it’s that strong of a record.