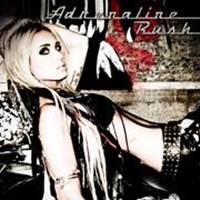 Starting in 2012 around vocalist Tave Wanning and producer/ songwriter Erik Martensson, the quintet Adrenaline Rush from Sweden began searching for the right musicians to fill out the lineup. All handpicked from bands around Stockholm, this self-titled debut album is an 11 song Melodic Hard Rock affair that is very energetic and party oriented.

The performances from guitarists Ludvig Turner and Alexander Hagman, along with bassist Soufian Ma’Aoui and drummer Marcus Johansson are first class and right in the pocket. A lot of the material has that late 80’s/ early 90’s Los Angeles Sunset Strip feel, something you would expect from acts like Dokken, Babylon A.D. or possibly Ratt. "Change" and "Girls Gone Wild" rev up your engine from the starting tempo gates or guitar riffing, while "When We’re Gone" takes the album into serene, softer territory yet still has the power to rip out some unforgettable guitar and vocal harmonies. There are times when the material veers dangerously close to known tracks – I hear a little Shania Twain meets later day Aerosmith for instance in the mid-tempo swing/ shuffling "Oh Yeah!", which seems perfect for Tave’s sexy/ playful personality but doesn’t stand up well on the musical end.

I’ll have to admit that Tave’s range doesn’t quite have the muster to carry a full album. Her tone appears to be very nasally and thin, which may fit more in the glam world instead of the melodic hard rock arena. One listen to "No No No" or "Black n’ Blue" gives you clear evidence that we aren’t in the midst of Pat Benatar power but more a younger female still looking for her best ‘pop metal’ years down the line.

This will be something that hits some ears well and leave others running for the hills.