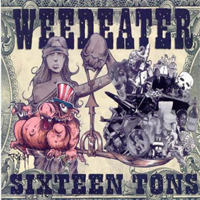 For all you southern doom/sludge fans out there, both of Weedeaters two first albums are being re-released for your listening pleasure.
For those who know and love bands like Eyehategod and Crowbar, this is right up your alley. Maximum fuzz with an vocal that sounds like nothing else.
Weedeater startet out by Dixie (Dave Collins) when cult act Buzzov*en called it quits (for the x time) around the year 1997.
Weedeater tok the Buzzov*en ball and ran with it, keeping up the tradition of what real sludge metal should sound like.

Both their debut "…And justice for Y´all" (2001)and "Sixteen Tons" (2002) have now been re-issued and they both are heavy as f**k (again, what is heavy?).
The guitars are downtuned and fuzzy as hell and Dixie´s vocal is just an formidable act of crushing words on top of each other and making it sound like nothing else.
The material is guitar focused as all sludge is, it´s all about the riff!

The sound/production is not great but good enough to really get what sludge is all about.

Both "..And justice for Y´all" and "Sixteen Tons" are (in my book) considered mandatory listening and a great starting point to get to know the real doom/stoner/sludge sound you´ve heard so much about but never bothered to check out.