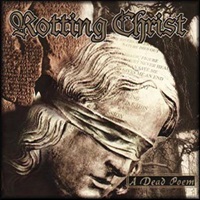 The fourth studio album from Greek metal act Rotting Christ would be a breakthrough record for the group, tempering their extreme black roots into a more palatable, gothic template. Originally appearing in 1997 through Century Media, Greek label Sleaszy Rider sought the rights to re-issue a lot of the band’s back catalog, and this is a fine document for a lot of newcomers to the band’s discography to dig into once again.

A number of mid-paced guitar harmonies contrast beautifully against the harsh vocals- check out "Full Colour Is the Night" and the Paradise Lost-like stealth creepiness for "Among to Storms". Bassist Andreas Lagios plays a prominent role in some of the thicker sounds of the title track, a song filled with wonderful dynamic juxtaposition between guitarist Sakis Tolis whispering vocals, a stunning melancholic main riff (Sentenced would be so proud) and a bluesy, effective solo break that weaves all of the moodiness back together. Samael’s Xytras also acted as engineer, producer and session keyboardist for "A Dead Poem", brilliant pulling together the band’s past and future ideals. I can sense his influence on the tribal-oriented "Out of Spirits", another strong track due to its mid-tempo roller coaster arrangement and Maiden-like guitar melodies.

No bonus tracks are present- but that’s fine when the material is as professional as on "A Dead Poem". Rotting Christ certainly established themselves as a high caliber talent that were going to be innovators or original in their approach for years to come. 10 tracks and 47 minutes of gothic extreme metal without compromise, just as the way the band intended. Newcomers to the band’s extreme ways need this record to understand the passion, creativity, and insight to all facets of metal they possess and render exquisitely on record.