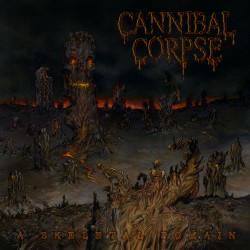 13 albums in and US death metal titans Cannibal Corpse are still up there with the best of them. To be honest, I had gone a bit cold on this act during the Erik Rutan years. Not that I blame his production job really – I suppose the first problem for me was the lack of really standout tracks on each of those records. Secondly though, I must admit that I did find Rutan’s production a bit too monolithic – it was like getting hit by a full-speed train. The problem there is that you die instantly. The sound this time has more definition than ever, yet is still as powerful as before. So this time around you are duct-taped to a chair and tortured for 44 minutes before you die. And then you come back to life and do it all again. Game, set and match to Mark Lewis.

Everyone has their favourite Cannibal Corpse albums, many reflecting the era they got into the band. My most-listened ones are ‘Tomb of the Mutilated’ and ‘The Bleeding,’ with the less globally popular ‘Gallery of Suicide’ also well up there. Now, I think I am going to have to put ‘A Skeletal Domain’ up at the top of the list too. Quite simply, the songs are better than they have been for many years. Cannibal Corpse had already proven themselves time and time again in terms of musicianship and brutality, (even though they spent the last 10 years trying to flog the point over and over) so it makes perfect sense that they came full circle and remembered how to put a memorable track together. ‘A Skeletal Domain’ has all of the high-speed chugging you’d expect from the guys but it also marks a return to a slightly thrashier sound. This is great news, because it allows for more stop-start impact and variety, ultimately setting things up for the strongest Cannibal Corpse album in years.

My only quibble is the annoying lyric in the third song – ‘If you want to live you have to kill or become.’ Become what? Maybe I’m a weirdo, but the bad grammar so annoyed me that I deleted this track (in my defence I am an English language teacher so please forgive me!). Next time he is writing it might be best if Rob Barrett confines his efforts to riffs and leave the lyrics to the rest of the guys.

Other than that, ‘A Skeletal Domain’ comes highly recommended for new and existing fans alike.