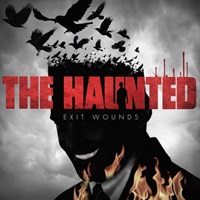 If you’ve paid attention to this Swedish thrash act through the years, you know there have been ups and downs, lineup changes, and even stylistic shifts that have met with approval for some, disdain for others. "Exit Wounds" is their eighth studio album, and first in a while for returning members Adrian Erlandsson on drums and Marco Aro on vocals. They’ve also added new guitarist Ola Englund who last played in Six Feet Under. I must admit their shift in the final Peter Dolving-led years (especially "Versus" and it’s follow up "Unseen") did make my interest wane in this group- so confidence was high that the energy level would return to their early years.

Oh boy, has it ever! The 91 second "317" instrumental salvo is a prelude to the main attraction. Marco’s impeccable roar signals the speed abandon that is "Cutting Teeth", the riffs and thrash tempo slicing away to remind listeners that their Slayer-esque fervor is back. Patrik Jensen and Ola Englund rise to the challenge in terms of dual bulldozer picking and general heaviness – setting up some masterful transitions during "My Salvation" and the low-tuned stomp fest that is "All I Have". Adrian and bassist Jonas Björler are off to the bullet train races on "Temptation", but can also quickly change things up on a second’s notice into this mid-tempo groove before returning to their semi-punkish thrash ways.

Marco has the acidic, despair voice down pat – resolute, dripping in metal screams and giving the material that added spunk that’s been missing for a few years. Check out the 60 second grenade "My Enemy" or "This War" for bloody brain battles where I sense vessels bursting not only in audiences when these tracks are performed, but also from many in The Haunted as well. And then there are the tasteful melodic guitar runs that come up from time to time in songs like "Infiltrator" or "Eye of the Storm" that keep the heads flailing and bodies piling on top of each other – just as you face the next face melting thrash tempo or crunchy riff barrage.

14 songs and 44 minutes of proof that The Haunted’s best days are still in the present, and this could be the comeback of their career they needed. "Exit Wounds" enters the head and heart without compromise, just as the quintet intended.