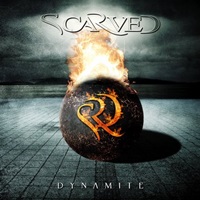 A Belgian female-fronted hard rock band, Scarved started in the fall of 2012 and now release their debut album "Dynamite" – an 11 song affair that has the quartet dipping one toe in the classic template while the other crosses modern rock lines. Luc Van Dessel can certainly rip out a great energetic lead break, and bassist Wim Wouters also isn’t afraid to flex some prowess abilities. Be it wah wah guitar action a la Led Zeppelin on "Devil in Disguise" or the highway ready charge of "Eternal Rush", Scarved knows how to hit hard on the hooks and wrap it around the savage, commanding voice of Caro – definitely not gothic siren material and more in line with heavy metal gods of Halford/ Dio caliber.

The band loses points on a couple of fronts: the obvious bass/ main riff knick of "Ace of Spades" on "Army on Wheels", as well as the less than ideal double bass tone chosen to represent Geert Mariën’s work throughout. Dio-era Rainbow meets Zeppelin comes in on the epic "Eastern Treasure" – and hopefully an area Scarved explores more on the next record, as it does balance out a lot of their more straightforward offerings. Unafraid to use Rush oriented bass play on "Payback Time" can also be a differentiator from most hard rock/ metal acts who just use bass as a root note backdrop instead of a significant dynamic element in a band’s style.

In the end, "Dynamite" is a decent start, and one that Scarved can build upon as they get a little more live show action under their collective belts.