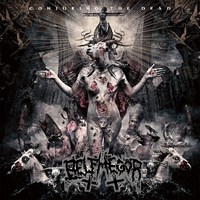 Austria’s blackened death metal pioneers Belphegor are back with their 10th studio album, ‘Conjuring the Dead’, a 10 track dose of brutality, death and destruction that extends the wobbly career of this darkened quartet into its third decade. The tracks provide a decent mixture of the different styles seen in black metal and death metal, and it’s a mixture that, while not always perfect, is well worth a listen for fans of either genre.

The album is well structured, moving expertly between the various musical styles implemented by the band and running with a succinct pace. Belphegor mainly avoid coming off as chaotic or inexperienced, something they’ve probably learned following the recordings of their other albums. It manages to blend the genres together in a way that maintains the signature styles of their respective genres, while at the same time creating a sound that comes off as something truly unique. This is seen perfectly with ‘In Death’. The combination of the fast paced brutality and growling vocals of death metal with the epic instrumentals and dark lyrics from black metal create a musical image that is both beautiful and horrifying at the same time. However, the songs vary in their ability to fit this recipe and some are quite messy in their sound, probably heard most succinctly on ‘Black Winged Torment’. The latter half of the album also stands as a far weaker set of songs than the first few tracks. The mix between the high-pitched screeching black metal vocals and down-trodden death metal growling gets a bit chaotic in the last few songs, and in ‘Lucifer, Take Her!’ it is hard to really embed yourself in either vocal region as their overlap is quite erratic.

In the end, ‘Conjuring the dead’ is pretty much what you’d expect from a band that’s reached double digits in their studio releases. It’s exactly what they’ve offered in the past without really offering anything spectacularly new, but at least what they have on offer is relatively entertaining most of the time. The weaknesses that bring the album down are mainly superficial, and to a certain extent subjective as well, as your personal tolerance of their more chaotic sections will impact on your opinion of the album as the whole. However, while there’s nothing that really makes this album a poor effort, it lacks a certain boldness and desire to explore new territory. Belphegor have done better in the past, and even prove on this album that they still have the ability to deliver fantastic blackened death metal, so all hope is clearly not lost for the Austrian quartet.