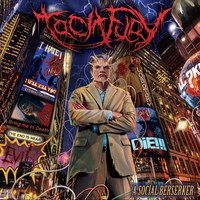 Russia and death metal are hardly two things that are often found in the same sentence. In fact, there’s remarkably few metal bands that seem to make an impact on the world stage coming out of that region in general. At this stage it would be easy to launch into a ten page essay as to why that is the case, but rather than bore you all to death with social science, let me instead tell you about a different kind of death, in Russian Tacit Fury’s newest album, ‘A Social Berserker’.

The album is a seamless mixture of old and new death metal. The vocals are the perfect amount of old school growling while adding the intensity and brutality of the newer generation. The riffs are heavy as all else and balance majestically between new musical styles and the genre’s older counterparts. The drums do sound a tad hollow at times but mainly integrate quite nicely with the songs overall structure. Songs like ‘Lacerated, Strangled, Impaled’, ‘Mind Crushing Power Dominance’, ‘The Saw Wheel of Fortune’ and ‘War Against All Living’ show a sincerity in the band’s approach to its craft, and a clear desire to make innovative death metal rather than just run through the motions of what is expected of the genre. While not all the songs manage to stand out as creative achievements, there’s a surprising lack of bad material in this 12 song effort. Some of the songs do come off a tad repetitive, but even the recipe that’s being repeated is quite satisfying to listen too.

‘A Social Berserker’ is a solid effort that pushes some boundaries while maintaining others. It lacks that final finesse on some of the tracks before it can reach its full potential, but the album shows there’s enormous talent in Tacit Fury dying to get out. It also shows that Russia and death metal are not only two things that can go together in the same sentence, but belong together!