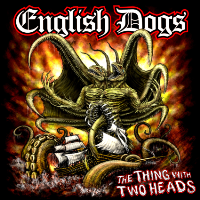 I have been a fan of English Dogs for many years now. I love the d-beat power of the early stuff like ‘Forward into Battle’ and still listen to the techno-moshing ‘Where Legend Began’ regularly. I even bought and spent long hours with their less well received pop punk ‘All the World’s a Rage’. So as you can imagine, I hopped on the chance to review this, the first full-length in almost 20 years and as close to the classic line-up as you could ask for.

But I can’t say I like ‘The Thing with Two Heads’. Straight from the first bar, I had a sense of disappointment. The reason for this is because, quite simply, this effort doesn’t convince me on any level. Yes, it does most of the things we know and love the English Dogs for, but it doesn’t excel at any of them. The power of the early years is absent, the technical thrash elements sound laboured and the choruses just aren’t catchy enough. Perhaps the standard has increased too much in the two decades the band has been absent? Things like Gizz’s flat vocals worked for me before but now… not so much. Perhaps this is too light for the metal mob and not punk enough for the spiky haired brigade? Coming to the penultimate track ‘Rectify’, we are treated to a little of the magic we loved from earlier days, but it is too little too late. The verdict has been passed – this is not a keeper.