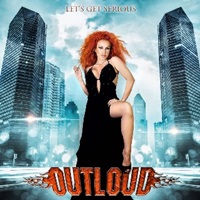 The third album from Greek heavy metal/ hard rock leaning Outloud "Let’s Get Serious" elevates their sound a little more. But that really shouldn’t be surprising considering the talent within the band- anchored by Firewind guitarist/ keyboardist Bob Katsionis and the versatile pipes of singer Chandler Mogel, their first two albums "We’ll Rock You To Hell and Back Again!" and "Love Catastrophe" straddled the lines of late 80’s melodic hard rock and straightforward heavy metal and gained modest acclaim.

Opening right out of the gate with the singer meets Skid Row friendly "Death Rock!" that occasionally gives drummer George Kollias the chance to flex his speed fill/ double bass dexterity, the follow up "I Was So Blind" is a classic blend of latter day Rainbow oriented smoothness and TNT-like grace. Bob again uses keyboards sparingly, preferring his six string axe attack along to carry the bulk of the workload – check out the bluesy stair step licks for "A While to Go" or the heads down power riffs for "Toy Soldiers" to know the man is well versed in all aspects hard rock and heavy metal. Changing up the mood is a necessity to sustain full album interest, so the acoustic/ keyboard led "It Really Doesn’t Matter" proves Chandler should be at the top of the list for strong singers, as Mike DiMeo, Joey Tempest, and others in that ilk are well within his range.

"Let’s Get Serious" provides 12 tracks of solid, good time heavy entertainment value. Those who think that this genre withered away at the start of grunge really need to examine what’s out there today – as Outloud are one of the best purveyors of this style and should make modest gains in terms of a following. Third time is the charm for this band.

OBSEQUIAE – Suspended in the Brume of Eos