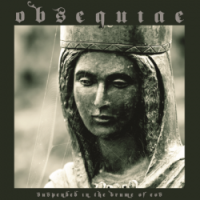 OBSEQUIAE – Suspended in the Brume of Eos

Obsequiae is something that seems to visit only rarely these days – an original act with a new and interesting take on BM. From the first bars we are treated to the gentle lull of folksy medieval-sounding guitars. These are allowed to flow on and more are added on top, creating a heady layering of melodies that manage to sound modern while taking the listener to some firelight feast in a European castle 500 years ago. At times a coarse guitar is overlaid, and along with the harsh vocals, this creates a needed contrast. There are also more straightforward passages where the duo blasts it out in true style, adding variety and ensuring the medieval styles don’t get too cloying. The short acoustic connecting tracks showcase N von R’s knowledge and technique as a master of his chosen form.

The production plays straight down the middle – a little rough and rustic, but also quite balanced and contemporary, so we can hear everything going on but the atmosphere hasn’t been destroyed or polished to death.

‘Suspended in the Brume of Eos’ is an interesting (and that compliment shouldn’t be downplayed or underappreciated) and fresh voice that takes the listener on a journey to a past filled with wolf-haunted forests, candlelight reflected in goblets of mead and troubadours in velvet doublets. Well worth the price of admission.