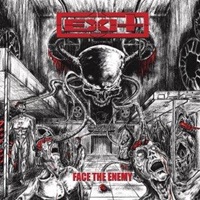 The third album from Swiss thrash/death quartet Exit, "Face the Enemy" has an interesting balance of modern stomp, melodic interludes, and a vocalist who could rival Barney Greenway from Napalm Death in terms of gruff, low growls. The band appear to be adding in more Fear Factory clean parts as a bridge to their heavier sound, giving "Fight Them Down" more of a commercial vibe, although the drumming in the verses is still of the one-two up tempo variety. The follow up "Life Is Now" opens on a Soulfly tribal note before the mid-tempo to blast contrast kicks in, the song developing into a modern montage of thrash, death, and a touch metal-core.

There are times where guitarist Beni Sax demonstrates a little weakness in his clean vocals (check out the 4:10-4:40 section of "The Brainless People" for serious struggle in pitch control), so overall I would put Exit in a capable but not outstanding class of bands that prefer to keep the speed at a decent thrash clip and sprinkle in the right harmonies and high guitar melodies when necessary to give people a hook. Martin Haller and Beni put on a ‘can you top this’ guitar clinic during the instrumental sections of highlight "For One Short Moment", and I hope this is an aspect that explore a little more often on the next record.

I believe Exit will probably appeal more to the younger generation of heavy music followers that enjoy a little bit more current groove and nuances that acts like Trivium or Chimara employ- a little squeal here, a ½ time tempo change there. "Face the Enemy" isn’t half bad – it’s a record though that I wish would go forth more from a stronger musical platform and be less worried about keeping up with the times.

INSOMNIUM – Shadows of the Dying Sun