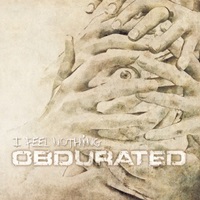 Briefly known in their early years as Obdurate, taking to the past tense in their updated moniker doesn’t mean this French act’s sound is stuck in the past. Although influences certainly abound from the Bay Area and Scandinavian camps, the 10 song "I Feel Nothing" album showcases a sturdy set of compositions that level the competition. Traversing the lines of Swedish thrash/death and melodic metal, songs such as "Unreason" and "Nomophobia" have the ferocity and energy to send audiences berserk.

Kudos to guitarists Olivier Flamein and Dominique Jean – their ability to flick a switch and captivate from bulldozer riff parts to semi-melodic meets neo-classical guitar leads and harmonies is the stuff that makes legends – thus the comparisons to Arch Enemy, Iron Maiden, even fellow French artists such as Lyzanxia. Vocalist Cédric ‘Deke’ Hochedé has one of those roaring throats that probably gargles sandpaper on a regular basis, straddling the thrash/ death lines and giving Obdurated more of an underground appeal through fierce arrangements such as "Hoax" and the moodier closer "Forefathers".

Sometimes the best work isn’t necessarily the most original take, but more of the nuances and dynamics one can build off a familiar style. "I Feel Nothing" succeeds more because of what is accomplished – sharp hooks, sharper instincts, and a desire to channel aggression and melody into appropriate directions. For a third album, Obdurated have established a firm grasp of their strengths and should have little problem gaining a faithful audience who love the mix of thrash, death, and harmony elements.