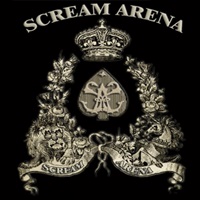 The tag line on Scream Arena’s official Facebook page couldn’t be more appropriate: proof that men with long hair still roam the earth and plug in and play live. Hailing from York, United Kingdom – it’s refreshing to know in 2014 there are still musicians that believe natural instrumentation sans technology enhancement can still be a viable option. This self-titled 11 song album has a street level, blue collar work ethos and similar execution – lean, mean, and taking no prisoners.

I love the comfortable vocal harmonies on instant hook-laden arrangements for "Knave of Hearts" and "Forever" – main singer Andy Paul has one of those laid back effortless techniques that not a lot of hard rock vocalists can pull off. Shark Island’s Richard Black and Andy Taylor (during his solo album days) mixed with a touch of the current Scandinavian sleaze movement would be the best comparison of what to expect from Mr. Paul. Musically Scream Arena favor a lot of hard rock and metal that has a meat and potatoes aspect to it- raw, punchy guitars, bass that hits from the heart and this ferocious drumming that kicks from the snare and cymbals all the way down to the fill and double bass rolls.

The quintet can be reflective in quieter build up songs such as "Racing to the End of Night" and then crank up the guitars and anthem strains for their stirring Elvis Presley "Heartbreak Hotel" cover – done a little bit more in a slower, steady metal arrangement. Musically I feel a wide swath of bands that Scream Arena take into account: Shark Island, early Europe, W.A.S.P., Judas Priest, Dokken, and Accept all come up on fine energetic songs such as "House of Pain" and "The Price of Love". Producer Paul Sabu must also be acknowledged, his superb insight and accurate knob-twisting skills give Scream Arena an in your face tone to their material – something that would make it easier to know how this translate live.

Champion bands who concentrate on the roots of hard rock and heavy metal – Scream Arena are the real deal, not smoke and mirrors in a hype dream.