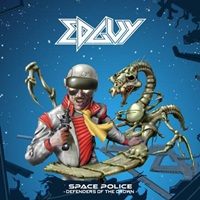 Change- evolution – it’s a constant throughout humankind. We are born, we grow into adulthood, we hopefully mature, and eventually we need to come to terms with the finality of our lives here on Earth. Throughout vocalist Tobias Sammet’s musical career, he’s set out to establish a style, and quietly evolve based on experience and natural creative curiosity. In the mid to late 1990’s, Edguy was thought of as the second coming of Helloween- especially on their third album "Theater of Salvation" where I remember in an interview I conducted with Kai Hansen from Gamma Ray for another fanzine he would say Tobias was ‘out-Kisking Michael Kiske’.

As the band would tour the globe and put out more albums, their sound would change into a more stripped down, good time hard rock direction (check out "Rocket Ride") that often divided their appeal between newcomers and veterans. Now on studio album ten, "Space Police- Defenders of the Crown" appears to balance out the old, tried and true power metal they established them as a force to be reckoned with, yet not forsaking a few mid-tempo hard rocking anthems that still have that ‘good time’ spirit at heart.

You get the Felix Bohnke driven double bass, happy tunes tailor made for crowd sing-a-longs such as "Defenders of the Crown" and "Shadow Eaters". There is the somber, soulful power ballad for "Alone in Myself" that wins me over through subtle organ strains and shifty, slower drum parts. And the band aren’t afraid to tackle a left-field cover, re-interpreting the 80’s dance classic from Falco "Rock Me Amadeus" – perfect for Tobias’ playful word nature. The winners for me are the driving "The Realms of Baba Yaga" – a veritable riff treasure trove for guitarists Jens Ludwig and Dirk Sauer that Randy Rhoads era Ozzy and Whitesnake mavens would love put in a power metal context, and the 8:50 minute epic closer "The Eternal Wayfarer", featuring some of the best vocal melodies, keyboard hooks, and dynamic shifts you can expect in any Edguy song to date- it’s like the band chose to channel Dio-era Rainbow through this arrangement.

If I had to compare the album in the band’s history, it would be the logical successor to "Hellfire Club"- still powerful and catchy, but not all up-tempo bombast. As such, I know a lot of fans will not be disappointed, including this reviewer. "Space Police- Defenders of the Crown" gives Edguy the platform to transport their listeners into the future while not discounting their past discography.

GAMMA RAY – Empire of the Undead