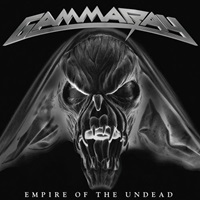 GAMMA RAY – Empire of the Undead

Not even a devastating studio complex fire will stop the Gamma Ray metal train in 2014. Fortunate for us listeners, the studio masters for the 11th Gamma Ray album "Empire of the Undead" did not smolder into oblivion, and as such we welcome this 10 song record with open arms. Longtime drummer Dan Zimmerman stepped down from his throne in 2012, but fear not as his replacement Michael Ehré has years of experience through bands such as Metalium, Firewind, and his own Love.Might.Kill act.

At this point in the veteran power/heavy metal career that is Gamma Ray, most people know what you are going to get from Kai Hansen and crew. A mixture of epic style songs, straight ahead anthems, and the occasional throwback to his Helloween roots in terms of speedy, double bass driven material full of mead-hall style choruses sure to bring the festivals ablaze with energy. "Avalon" fits the first category, although throwing the listener a shift mid-way through for an Iron Maiden-oriented riff/ time signature change that should induce applause and melody crowd chants. "Hellbent" is an ode to metal, leaning towards the speed fare of old, Kai screaming his heart out in the chorus while he and Henjo Richter participate in a spirited back and forth to dual harmony lead break.

Even when the band go more straightforward and pump out the mid-tempo material that harkens back to synchronized Accept/ Judas Priest styled axe moves such as "Pale Rider" or "Seven", there is enough Gamma Ray originality in the little Dirk Schlächter bass spotlights or Kai’s passionate melodic trailing vocal notes to make you return to these songs again and again. And if you want another "I Want Out" or "Send Me a Sign" style anthem, "Master of Confusion" fits the bill more than adequately, a playful number featuring another stellar emotive instrumental section that never forsakes melody to improve memorability. Overall the record has a sense of urgency, a ‘take no prisoners’ mentality that even allows a ballad like "Time for Deliverance" room to breathe and develop away from a typical ballad through its Queen-style background harmonies.

Their best album since "No World Order", Gamma Ray are out to prove that while newcomers may want to overtake the power throne, you are going to have to work that much harder to usurp the best in the business- and "Empire of the Undead" proves once again why these Germans are on top of their game.