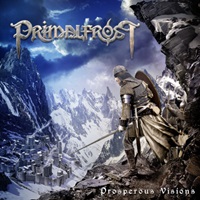 Starting out as a one man project in 2012, Dean Paul Arnold has set about an ambitious aural entity for Primal Frost. The Toronto, Canada act actually performs live as a four piece- but in a studio setting Dean is the sole writer, composer, vocalist, and performer – handling all instrumentation. "Prosperous Visions" is a 10 track, 55 minute album that is epic, aggressive metal – fusing together the best of death, black, and folk sub-genres into Dean’s ideal sonic vision.

Vocally Dean emphasizes a raspy death roar as black metal screams or clean morose parts punctuate for atmosphere. Keyboards come to and fro as symphonic reminders, otherwise the guitars, bass, and drum programming take up the lion’s share of Primal Frost’s instrumentation outlay. His lead breaks within "Path of the Sky" showcase craftsmanship and years of dedication, obviously using inspiration from Arch Enemy just as much as Dream Theater or Dissection. The speed trilling fluctuates depending upon the intensity of a song- I love the drop on a dime shift into tender folk guitar for instance on "Beyond the Shores and Lands" before the volley match between electric and acoustic instrumentation takes shape.

You can sense a healthy jig going through the dark death/folk number "Tale of the Hero" – but the clean, hoarse delivery from Dean would be much more effective if given an alternate singer to up the emotional factor, as this is one of the best tracks on "Prosperous Visions". A strong Scandinavian folk/death foundation plus killer double harmony instincts along with the right black metal scream accents kept my ears pinned for the 6:37 duration.

Another factor that could lose people is the predictable drum programming patterns chosen for some of the faster songs. "Distant Cries of War" and "Silencing the Empire" could be ten times more effect given a human drummer’s intuitive fill feel or transition dynamics – and I am only saying this because I believe Dean has a great platform to build on. In the end "Prosperous Visions" contains more pros than cons – and those who love epic metal should delight in these compositions.

THE DRIP – A Presentation of Gruesome Poetics