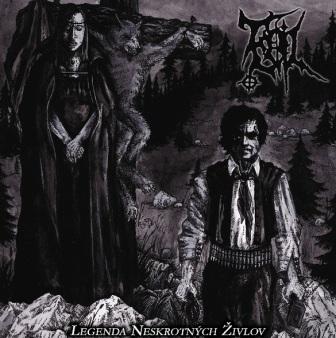 "Legenda Neskrotnych Zivlov" by the Slovakian horde known as Evil (quite the original band name, wouldn’t you say?) is comprised of an intro and five rather long songs clocking in at 40 minutes in total. Following the industrial-tinged introduction the band launches into a cold and depressive mid-paced black metal trance interrupted by somewhat fast-paced parts from time to time. I think the riffs, melodies, and vocals are decent albeit not fantastic, and I like the sound of the drums. I wouldn’t say that the songs are catchy as such in that one has to listen to them quite a few times before the melodies and moods and so on start to sink in, which is not a bad thing as such, mind you. The melancholy of "Trpký návrat k nevinnosti" appeals to me and the rest of the songs are not downright bad or crappy, but they simply lack what it takes to make them great and mindblowing. The ambient-like parts that creep in from time to time seem a bit misplaces and pointless to me in the sense that they don’t compliment or underline the mood of the rest of the songs. "Legenda Neskrotnych Zivlov" comes across as a mediocre release that certainly has some potential and some good parts on it, but which nevertheless misses the mark in terms of evoking a truly dark and depressing mood.

BLOOD RUNS DEEP – Into the Void