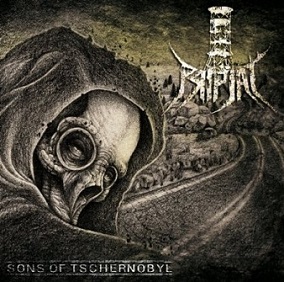 Pripjat, which is a German thrash metal band, has released a pretty decent album in the shape of "Sons of Tschernobyl". The album contains 10 rather intense and violent songs in the traditional 80ies and early 90ies thrash metal vein. Some parts remind me of Destruction, Slayer, Exodus, Sodom and Kreator while some of the slightly more melodic ones bring to mind Megadeth In other words, there is nothing original, innovative, or groundbreaking to what Pripjat do, but I wouldn’t say that "Sons of Tschernobyl" is altogether worthless or without any merits because of this. Taking into consideration that this is their debut album I would say that things are looking pretty good up ahead. While "Sons of Tschernobyl" falls short of being mindblowing or great, there are plenty of good riffs, intensity, hatred, and angry vocals to be found on this disc to keep most thrash metal fanatics occupied throughout the 41 minutes of music that make up this album. Also, the most of the songs are pretty well-arranged and structured and the solos are blistering in places, so check this one out if you consider yourself a thrash metal scumbag!

PANYCHIDA – Grief for an Idol