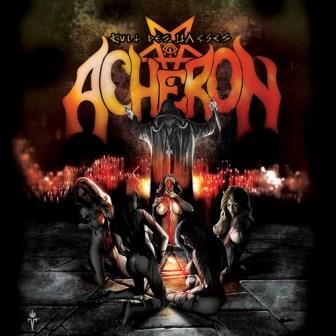 US based Acheron with frontman Vincent Crowley has allways been an oddbal of interrest for me. Since their debut back in 1992 ( "Rites of the Black Mass") they have have kept the satantic death metal flag high and kept their music semi interresting. Not to complicated but straight forward without being to extreme in either the vocal or musikal departments. The spoken words/interludes from various satanists between songs have been both amusing and to some degree anoying during the various albums.

"Hail Victory"(95) and "Anti-God,Anti-Christ"(96) are two albums that I´ve listened to on and off during the years for the simple reason that Achreron´s brand of death metal does not require to much attention while doing something else.

It´s therefore with some excpectations that I received Acherons latest opus "Kult des Hasses" and to start with the conclusion, Acheron does what they know best, play straight forward unholy death metal.

"Kult des Hasses" spins for about an hour and among the 10 tracks there are not any really weak songs but not any killers either. The well proven formula works fine with mid-tempo passages and simple but effective arrangements. Vocalist Crowley´s vocal is very fitting to the musikal background and the general flow of the album is very  smooth. The lyrical content is well known to Acheron´s fans and there are no spoken phrases inbetween songs this time.

To conclude, Acheron delivers a strong album, but nothing new. They stick to their formula and it works well. If you know Acheron you will not be dissapointed.