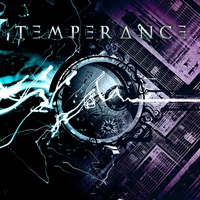 Modern melodic metal with extreme nuances for dynamic flavor appears to be the hot genre – given the impact of Sweden’s Amaranthe in terms of sales, touring, and general buzz, I expect this trend to continue. Italy’s Temperance on their debut self-titled album wish to grab their share of audience through a similar template: dual female (clean) and male (growl) vocals, riffing that at times could be melodic death and then power/gothic in the next strain, plus electronic driven keyboard parts with steady grooves to make every audience bounce.

I enjoy the Spanish folk parts that dynamically separate the heavier strains for "Hero", but at times the keyboard/ dance fusion can get a touch too commercial for my metal liking on "To Be With You" (although lead guitarist Marco’s backing growls swing for the death fences). Temperance is at its best when the keyboards have a symphonic touch and the guitars and vocals carry the melodic aspects- check out the dramatic "The Fourth Season" and semi-operatic touching closer "Lotus" which features chilling vocals from Chiara and this penetrating sense of locomotion in terms of the arrangement and musical chemistry.

Bridging the lines between Lacuna Coil, Epica, and Amaranthe, Temperance should have little issue gaining a wide swath of consumers who prefer their bands to embrace multiple sub-genres in terms of their songwriting. A good beginning that can only gain seasoning if the band is able to throw together some decent touring/ festival opportunities. Given that they formed only last year, I’d say the 11 track "Temperance" is on the right track to establishing their presence in the scene.