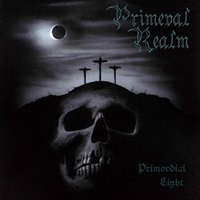 Recording most of his own material out of necessity due to a lack of musicians in the New Jersey area sufficiently into doom, vocalist/ guitarist Joe Potash released three demos for Primeval Realm in 2009 playing, writing, and producing it all (keyboards, bass and drums included). Now in 2014, Joe has a secure lineup in place (Reed Thomas- bass, Mike White- drums, Brian Leahy- keyboards) and we gain a debut full length album in "Primordial Light".

Compact at 39 minutes, the six songs (plus intro) feature classic doom riffs, thunderous chords and occasional organ thickness that will remind most of Deep Purple, Black Sabbath, and the masterful Solitude Aeturnus. Drum passages rarely progress above mid-tempo, highlights include the wah-wah lumbering "Black Flames & Shadows", the rhythmically swinging "Electric Knowledge", and comfortable "Heavy is This Mind" that has more of a straightforward, traditional feel. Joe’s voice has a little bit of that southern rock wail, yet very endearing and could catch more than a few doom fans by surprise.

Entertaining and comfortable, "Primordial Light" contains all the requisite elements that make classic doom the fabulous sub-genre that it is: heavy riffs, crushing tempos, a slightly jamming instrumental aspect, and musical chemistry you often can’t find in other genres of music. Primeval Realm prove that East Coast doom is as viable as anything from the Mid-West or UK these days – respectful of the past while striving to remain creative for a healthy future.