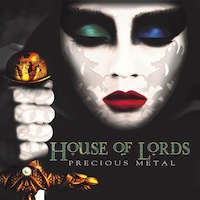 The ninth studio album from melodic arena rock/ AOR veterans House of Lords is crisp, clear, and strong – just as vocalist James Christian and company have been known for since the beginning years. "Precious Metal" contains 12 songs that vary from straight ahead rockers like "Battle" (love the B.J. Zampa thunderous drum roll opening) and "Swimmin’ With the Sharks", more stair step keyboard driven fare with James’ bluesy range shining through such as "Epic", on through to a variety of ballads that can be slightly commercial and stripped down like the title track or driving through the gamut of emotions in "Enemy Mine" (featuring guest duet vocals from Robin Beck).

Guitarist Jimi Bell is the perfect complement to James’ top shelf melodies, alert to make the right chord choices on the hard rocking "I’m Breaking Free" and also wielding some Reb Beach oriented riff segments a la early Winger on "Raw", unafraid to bend certain notes to stretch out the last expressive feeling through his axe skills. James understands the best AOR/melodic rock songs sustain themselves due to rich harmonies – the type that you’ve heard through the years from Foreigner to Journey to Def Leppard – and "Precious Metal" contains a boatload of them. The chorus to "Live Every Day (Like It’s the Last)" and the mid-tempo closer "You Might Just Save My Life" are two tracks that have stayed in my brain weeks after initial exposure.

Nothing wrong with consistency, especially if that bar has been set very high from all sides. "Precious Metal" is indeed another winner in the House of Lords catalog – so if you’ve forgotten about the band since their 1988 self-titled debut, this would be a great album to return to. And for those in the know, well this could easily top your end of the year lists in the melodic rock/ arena rock category.