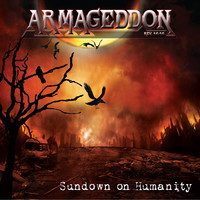 Wow, almost 30 years in the business and finally your debut album comes out- kudos to commitment from this Cyprus power metal quintet. Lineup changes and the mandatory government military duties put a little crimp in their output – but Armageddon Rev. 16:16 finally unleash a 12 track, hour long record with "Sundown on Humanity".

Expect a sound that is melodic power metal with a number of classic/ traditional influences. Elements of Rainbow, Dio, latter day Black Sabbath, and Fates Warning come up the most when I take in "Shades of Tomorrow", the slower, tribal-like "Fallen Angels and Lost Souls" and faster, riffy closer "Icy Blackness (Kursk)" that shows off some of their more thrash-like influences. Vocalist Jimmy Mavrommatis has a delivery that can be categorized as half power doom, half progressive: I would say Memory’s Garden and Ronnie James Dio/ Tony Martin with a twinge of Dennis DeYoung showmanship come into play when you check out his versatility on "Human Sundown" or the twin harmony, mid-tempo driven "Hypocrites of Destruction".

My struggle with fully recommending this album comes into the transitions and general excitement around the main riff choices. Occasionally veering into standard traditional hard rock territory with "New Day Will Come" and then going full circle into the Iron Maiden/ Fates Warning vein for the 6:44 "Strange Dreams", this could create confusion as to where Armageddon Rev. 16:16 hopes to go stylistically.

Maybe this will be an album that gains more airplay through time and seasoning. At this point, "Sundown on Humanity" can only muster light applause.