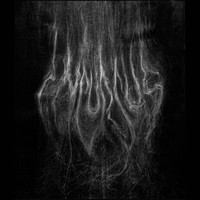 Incursus is a rather interesting American black metal band whose latest release, "Adaestuo", captured my interest a few days ago upon receiving the promo and spinning it a few times. This vinyl EP contains 4 songs simply entitled "Adaestuo I-IV" and a total running time of approximately 21 minutes. The music vomited forth by VJS is dark, twisted, and atmospheric, and it has a certain organic warmth and depth to it that is slightly reminiscent of Demoncy in places. There seems to be an emphasis on the hypnotic and trance-like and yet the songs contain some rather odd-timed riffs and unpredictable twists and turns here and there, thus adding some variation to the whole thing. One of the strongest points of "Adaestuo" is most definitely the awesome vocals. They are like an instrument and complement the music beautifully. There is nothing lame, weak, or tame about the vocals. Quite the opposite really. The fourth song is a droning ambient piece and a rather dark and rumbling one at that, which is a most fitting closure to a very solid and good release.

"Adaestuo" is neither innovative nor original, but rather well executed and interesting from start to finish, and I personally think that this is one of the more interesting US black metal releases that I have had the pleasure of listening to for a while. Check it out!