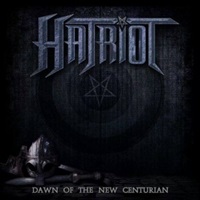 If you wish to build a platform in metal today, you can’t rest on yesteryear’s laurels. Vocalist Steve Souza understands this- his best work appearing during his Exodus years as many hold "Fabulous Disaster" and "Tempo of the Damned" with acclaim in the thrash world. The fire still burns for the movement though with his new act Hatriot- unleashing album number two "Dawn of a New Centurion" to set about a new regime of bands fueling the thrash fire with some more current extreme nuances to keep audiences alive and buzzing.

Featuring a lot of sound bites that accent the politically charged lyrics, songs such as "My Cold Dead Hands", "World Funeral", and "Consolation for the Insane" rivet with the dual ripping guitars and Zetro’s maniacal verbal onslaught, always one of the most unique and savage thrash vocals the world has ever heard. The Charlton Heston quote sets up the aggressive album opener adequately, the riff parade and up tempo drum charge rivalling a lot of the best work within Exodus, Testament, and Heathen. I like the fact that guitarists Kosta V and J.C. Justin Cole experiment a little bit with some of their melodic sides, offering some great counterpoint chord progressions and build ups in the 7:11 "Fear Within" as well as killer twin lead harmonies that rise and fall throughout the mid-tempo "Silence in the House of Lord", a number that should exhort a number of fist pumps and audience ‘hey’ chants.

Produced again by the veteran Juan Urteaga at Trident Studios, the quintet delivers 100% thrash to the bone, fully understanding the genre’s strengths and capably playing within them. I think the fact that the band has had another year gelling together makes "Dawn of a New Centurion" that much more mature and focused of a record. Zetro considers this Hatriot’s "Ride the Lightning" in terms of discography- showing more shades of their style palate- and I wholeheartedly agree. A great thrash-tastic way to begin your 2014.