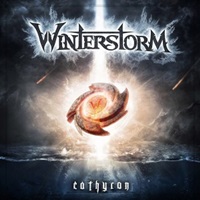 Multi-layered metal approaches appear to be the norm in 2014. No longer is it a guarantee for success/ acclaim to be a mere power metal or death/black outfit- a lot of newcomers infuse 2-3 different nuances or outside elements to separate themselves from the hordes. Take German band Winterstorm- active since 2008 and on album number three with "Cathyron", their base is power metal but they also inject a healthy dose of folk themes and epic grandeur through these 12 tracks.

Expect vocals that have a lot of Middle Ages/ epic feel from Alex, as if he were hanging from the mountain side preaching to the brethren below. Musically Blind Guardian and Orden Ogan come to mind often, along with the folk side of say Ensiferum and possibly Wuthering Heights – dual guitar team Armin and Michi weaving a number of stunning harmonic riff and lead breaks. Songs that stand out to me include the storytelling, mid-tempo "Burning Gates" and mead-hall call and response number "Metalavial"- but Winterstorm really have no problem fluctuating the speed or arrangements to keep things fresh and individual from track to track.

A minus to my ears lies in the low production values- there are times where the bass appears distant in the mix and the guitar tone could be a touch thicker, allowing the folk melody elements of "Far Away" stand out that much further. I know plenty that live for that yesteryear Viking history and storytelling metal- so Wintersun will gain modest appeal with those consumers. At this point though, "Cathyron" has too much obvious template borrowing from more established acts to truly make an impact on an already overcrowded scene.