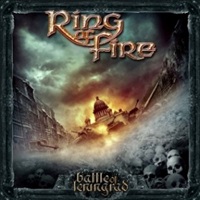 RING OF FIRE – Battle of Leningrad

Ring of Fire play progressive power metal with neo-classical flourishes and feature a number of veterans vital to the history of the scene. Vocalist Mark Boals is best known for his time with Yngwie Malmsteen- guitarist Tony MacAlpine gained acclaim for his Shrapnel instrumental records of the late 80’s, and keyboardist Vitalij Kuprij is well known in progressive circles with Artension. It took a decade to assemble all the moving parts again due to a heavy workload with other bands/ projects, but here we have the fourth studio album "Battle of Leningrad".

The continuation of Symphony X-like heaviness seems to be going hand in hand with their conventional neo-classical Yngwie framework on this 52 minute recording. The thunderous buildup for "Mother Russia" gives Mark Boals ample chance to warm up his pipes through speedy verses and a comfortable, melodic mid-range chorus, a refreshing change from acts who usually want to blitz your senses with bombast and flash. "They’re Calling Your Name" is an up-tempo follow up with virtuoso breaks galore from Kuprij and MacAlpine, along with an interesting ‘doom-like’ twist half-way through the song. The record continues along dynamic lines- Boals excelling with his lower register on the ballad "Land of Frozen Tears" while "No Way Out" is another hard charging anthem that power metal mavens live for.

What will kill the enthusiasm for many consumers is the lackluster production values for "Battle of Leningrad". When you expect guitars to punch you in the face with attack, they seem to be muted or cut down in the mix. The drumming is distant as well – I feel like I’m listening to almost a demo-like recording instead of full on power/ progressive metal album. This could have been due to a lack of money or time… but I do know many that will not be happy that this sacrifice was made as the songwriting is high quality and deserves an equal production outlook.

In the end, Ring Of Fire can deliver with dramatic, tension filled songwriting – so approach accordingly based on what you consider important. For me the overall product could have been that much better with all the right details in place.