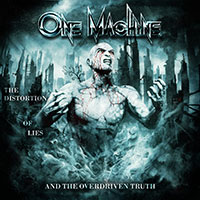 ONE MACHINE – The Distortion of Lies and the Overdriven Truth

International metal band with players from Denmark, England, Italy, and the United States, One Machine is the brainchild of guitarist Steve Smyth (who had played in Nevermore, Forbidden, and Testament through the years). Vocalist Mikkel Sandager (formerly of Mercenary) sings in a high pitch aggressive manner through many of these power/thrash tracks, channeling Rob Halford and Sean Peck (Cage) for opening title cut and an evil mid-range that works wonderfully on the Vicious Rumors-like "Armchair Warriors".

Steve and fellow guitarist Jamie Hunt lay down a ton of killer riffs, some with more current/ heavier overtones such as the Nevermore-ish "One Machine" and churning "Crossed Over", but others dancing the lines of power technicality- check out "Evict the Enemy" and closer "Freedom and Pain" for classic harmonies and dazzling riff changes. "Kill the Hope Inside" has a ton of thrash energy, while "Last Star Alights" showcases a slower, darker element to One Machine’s sound- proving that the band know how to construct a diverse selection of songs as to keep the listener’s interest time and time again.

Since the advent of home studios and the internet, there appear to be no barriers to assembling the right musicians from anywhere in the world- and to the benefit of the fans, we get killer records like this one from One Machine. I would prefer a shorter album title next time… but if that’s my only major beef, than you have to know the songwriting and performances are top notch.

"The Distortion of Lies and the Overdriven Truth" should be essential for those into Vicious Rumors, Cage, Nevermore, and others who straddle the lines of power and thrash. Let’s hope this develops legs to transfer the studio songs into future live performances- and if not, please let this not be a one album act.