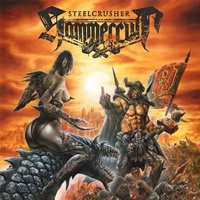 Teutonic bands such as Kreator and Sodom come to mind the most when taking in these 13 tracks, along with some American sharpness from the 90’s like Demolition Hammer or Vio-lence. Drummer Maayan Henik understands how to go full force one measure and then lay back into a comfortable mid-tempo pocket – check out the title track and the semi-punk feel for "Burning the Road" to get his wide open and prolific stance. Guitarists Arie Aranovich and Guy Ben David study at the altar of death and thrash metal’s best teams – laying down a bevy of twin blitzkrieg riffs, crunchy transitions, and worthy of competition lead breaks. Melody still factors in just enough amidst the crushing antics- the opening of "Ironbound" features twin harmonies that Maiden or old In Flames maniacs will love, while the vocals of Yakir Shochat are relentless and caustic, something that would cause the average consumer bloody throat damage.

I can see "Steelcrusher" gaining a wide array of appeal- as Hammercult have a punk edge at times that reverts to the current generation of heavy fans while other songs are just straightforward thrash with a death-like nature that should get many followers pumped up with adrenaline. Another delight in 2014.