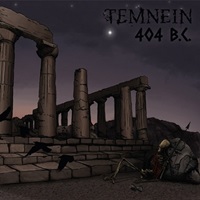 Temnein is a progressive extreme metal band with thrash/death influences. On their debut album "404 B.C." you can expect a wide array of tempos and aggression throughout, at times highly engaging in a melodic thrash/death framework and then at other times harsh and abrasive. Guitarists James Camozzi and Florian Frandidier steal the show on cuts like "Tangled" and "The Realists" with their At The Gates meets Quo Vadis/ Machine Head like harmonic-laden riffs and fluid lead breaks. Rhythmically the band have a lot of the technical chops and stunning tempo twists that Between The Buried and Me or Darkest Hour favor.

I do not believe the popcorn-oriented snare hits benefit Temnein in terms of what you would hear live, and as a vocalist Yoann ‘Sub’ Sachot employs a decent if albeit expected harsh delivery that is some parts Robb Flynn, other parts metal-core. The somber moments in "Heart Hooks" where the guitars/ drums / vocals blend as one should be an area the quintet explore a little more in future recordings, and the 13:37 "Bright Knife" has too many middle of the road parts to justify its longer arrangement.

As you can tell, "404 B.C." is a mixed bag for my metal tastes. Temnein I think probably sustain appeal with the younger generation who don’t seem to mind the shifting riffs/ tempos and stylistic changes, often within a nanosecond’s notice. Talent is there, so maybe this record just needs a lot of time to dig deep into the brain and body for long term success.

LEGION OF THE DAMNED – Ravenous Plague