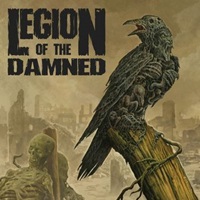 LEGION OF THE DAMNED – Ravenous Plague

The sixth studio album from Dutch band Legion of the Damned continues in their tradition of pummeling the listener with their brand of death-oriented thrash metal: primal and inflicting punishing blows to the brain and body. "Ravenous Plague" keeps the emphasis on the metal: guitars that churn with jackhammer precision, bass that reverberates to the core and double bass-fueled drumming up to the task of shifting tempos in a nanosecond.

Sure the opener "Howling for Armageddon" may hit the Slayer re-call button or the follow up "Black Baron" thinking older Sodom, but overall this quartet do not wish to develop a new twist or take on the genre- content to dish out non-commercial bludgeoning of the highest form. The acidic speed roar of vocalist Maurice Swinkels keeps up with the guitar riffing madness from newest recruit Twan van Geel surprisingly well- even when he is given a triplet fueled mid-tempo march effort such as "Summon All Hate", the trailing chorus and verse work sends chills down my spine.

The album to be gets stronger the deeper and longer you spend time with it: current favorites include the slightly melodic (for LOTD anyway) "Bury Me in a Nameless Grave" and speedy 5:53 "Ravenous Abominations" with loads of early European death/thrash elements and a nifty time change that is sure to make audiences explode before returning to breakneck Dark Angel meets Dissection brutality.  There are plenty of bands who can be extreme and who can shock- Legion of the Damned succeeds because they hone in on their musical strengths and find a way to create memorable arrangements album after album without succumbing to flash in the pan tactics.

A no brainer for the long timers, if you wish to get into some in your face thrash/death with no ballads in sight, "Ravenous Plague" could be your best record in 2014.