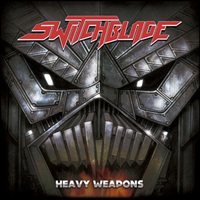 Eight years beyond their initial arrival on the scene and with a series of demos/ single releases under their belts, finally the debut album from Israel traditional metal quintet Switchblade comes out in the form of the 9 song "Heavy Weapons". Solidifying a permanent lineup this year with a new bassist and third guitarist in Boris Siper and Venedict Pavlovic, the band perform a style of 80’s oriented traditional metal with NWOBHM, German, and US metal influences. One can expect loads of twin guitar harmonies, steady four on the floor drum tempos with occasional bursts of double bass and thunderous fills for extra dynamic emphasis and a singer in Lior ‘Steinmetal’ Stein that could really be Bruce Dickinson’s twin from back in the "Piece of Mind" / "Powerslave" arena heights.

Highlights include "Euphoria" with a killer triple guitar harmony during the instrumental break as well as the Primal Fear meets Accept power of "Curse of the Father, Sins of the Son" that will make many a person bang thy head or throw the metal sign high and proud. Be aware that the guitar tone is straight out of "Balls to the Wall" period Accept and you’ll be happy with the melodic, head banging material sure to fire up crowds everywhere.

Adequate production, cool cover art and effective tones means "Heavy Weapons" should be a mandatory record for those who love street level traditional metal with a Dickinson-esque vocalist behind the microphone.