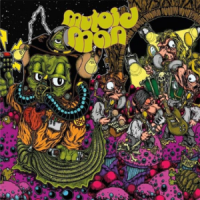 ‘Helium Head’ is the debut release from Mutoid Man – a project featuring Cave-In vocalist/guitarist Stephen Brodsky and Converge drummer Ben Koller. From the names you might know what to expect already – frantic bursts of proggy energy, just about held together by a melodic underpinning that wrestles to control and channel the swirling rhythms and acid-rock-on-speed style riffery.

At times, the whole thing threatens to become the source of the mightiest headache you’ve ever had, but I’m happy to report that Mutoid Man stop just short of that line. How an album that incorporates so much extreme and technical influence can still sound like something that would generate mainstream interest is a mystery, but MM have achieved it here.

I have always been a fan of oldies given the hardcore treatment and the cover of The Animals ‘Dont Let Me Be Misunderstood’ that closes ‘Helium Head’ is worth the cost of admission alone. At roughly 18 minutes, this is closer to an EP than an album, but hopefully that means Mutoid Man have kept something in reserve for a longer future release.

NEBELWERFER – The Aeon of Filth