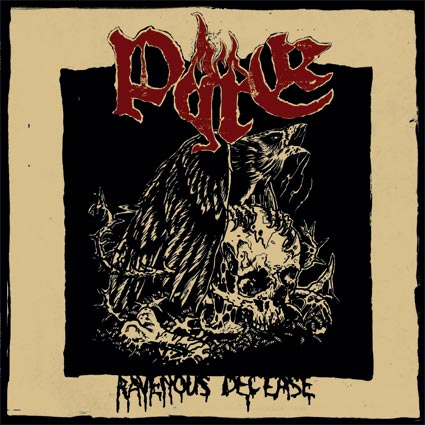 Pyre is a damn good Russian band who spews forth a vile mixture of black, death and thrash metal. I read somewhere that they were a death metal band, but to me their music sounds like a mixture of the aforementioned three genres, although I have to agree that the emphasis is probably on death metal. It definitely has a lot of thrash metal elements to it as well. There are five songs on "Ravenous Decease", one of which is a cover of Slaughter’s "Nocturnal Hell".

The raw, filthy, and intense sound of Pyre drew me in right from the start. The riffs are all catchy, the vocals are bitter and fit the material perfectly, the pounding drums sound great, and it’s so aggressive and punchy and yet it sounds like it was captured live somehow. In other words, nothing sounds touched-up, clean or sterile. We`re talking raw, unfiltered music here, boys and girls. If I had to choose any favorites it would probably be "Godess of Disaster", "Devastatic", and "Insanity".

Pyre sounds like the real fucking deal as opposed to so many of those bullshit retro-outfits out there who pretend to play old-school metal. "Ravenous Decease" oroginally came out on vinyl via Blood Harvest, but Assault Records re-released it on CD earlier on this year and included the Slaughter cover on it, which was a great move on their part. It is limited to 200 copies, so start browsing the web for any mailorder/distibution that has it now! Raw Unholy Death!