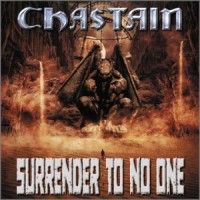 CHASTAIN – Surrender to No One

Back in the mid 80’s when Dio was my God, I discovered Chastain. Between Leather Leone’s gutsy vocals, Dave’s guitar wizardry and the sci-fi/fantasy themes, there was more than enough to suck me in and I still return often to ‘Ruler of the Wasteland’, ‘7th of Never’ and ‘Voice of the Cult’ for a fix.

Now, more than 20 years after Leather’s last work with the band, comes "Surrender to No One."  Needless to say, I was eager to get my hands on it and see how (or even ‘if’) the classic Chastain sound would be re-engineered for the new millennium.  The first thing that strikes is Leather’s voice. She hasn’t lost an ounce of her power or ability to carry a melody, but her voice is a little gruffer and the character has changed slightly with age. Some of the higher register stuff has lost a little of the sweetness but her voice is still as dynamic and forceful as ever.

The approach is a little more pared down than some of the previous Chastain material, with the song-writing taking a relatively direct approach. David showcases his talent more subtly too, so the ‘look at me’ moments are less in your face than before, but there is still plenty of top notch technique on show.

I am glad to see Chastain back in 2013 and happy to report that "Surrender to No One" hits the spot. Ok, it might not be all the way up there with ‘Ruler’ et al., but it certainly does nothing to damage my enthusiasm for this band and it gives other classic metal releases of 2013 a run for their money.