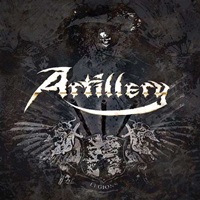 Danish thrash band Artillery return with a new drummer and singer in the fold on their seventh studio album "Legions". Vocalist Michael Bastholm Dahl and drummer Josua Madsen both came in last year, the latter following their last US/ South America tours in support of "My Blood". The melding of aggressive power riffing and semi-melodic vocals in a thrash style has allowed Artillery the chance to stand out amidst the hordes who prefer to just bash their way through songwriting.

As such, "Legions" is a 10 song album that is relentless in its pursuit for the thrash jugular. Michael and Morten Stutzer are a deadly duo on guitars, charging forth in highlight "God Feather" and then showcasing remarkable exotic nuances with taste on the follow up "Legions of Artillery". Dahl’s approach is not as Russ Anderson/ shout-oriented as previous vocalist Soren Adamsen, he can certainly scale the high seas with his opening screams within "Wardrum Heartbeat" and execute traditional verses with an emotional range on the dynamic rollercoaster "Enslaved to the Neither".

At this point in their career, Artillery know that you can’t just appease the masses with technical brilliance and blitzkrieg speed- so when they throw in the slower sections in "Global Flatline" to start, it makes the thick, speedy changes (a la Cyclone Temple/ Znowhite) to follow that much more meaningful and battering. And drummer Josua wails on the kit- probably losing tons of water weight when performing all these fills and tempo changes.

In a just world, Artillery would be at the top of the thrash chain- but I think the fans and critics that hold them in high regard know that this is an excellent, musical act that continue to shine album upon album. "Legions" should be mandatory if names like Paradox, Cyclone Temple, Znowhite, and Heathen mean anything to your ideal collection.

DEEDS OF FLESH – Portals of Canaan