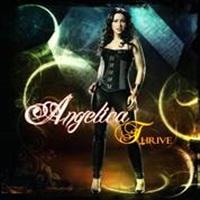 First coming to prominence through her work in The Murder Of My Sweet, Swedish singer Angelica Rylin releases her first solo album "Thrive". Joining her in terms of musical help are fellow bandmate Daniel Flores on drums/keyboards, Smash Into Pieces guitarist Per Bergquist, bassist Johan Niemann and solo parts from Jesper Stromblad, Magnus Karlsson, and Matt Guillory among others. Couple this with some of the best melodic rock/ AOR-oriented songwriters of today’s scene like Harry Hess, Robert Sall, and Alessandro Del Vecchio aiding in the process along with Angelica to create 12 songs of killer melodic rock.

Imagine if you will a record that recalls the best of Robin Beck and Ann Wilson and you will understand why "Thrive" gained immediate appeal right from the start. The ballads "Can’t Stop Love" and "Losers in Paradise" each have their own feel, the latter more in line with "Listen to Your Heart" / Roxette while the former crosses 80’s Heart with a touch of Bonnie Tyler dramatic power. First single/ video "Breaking My Heart" opens with a series of keyboard strains and repetitive chord flourishes before the guitars kick in and Angelica’s sultry melodies take over in the verses. Know that the keyboards play a very important role in the arrangements, even when the guitars get slightly aggressive in "Riding the Storm Out" or the uplifting, energetic closer "Take Me To Your Heart" (Jimi Jamison/Survivor fans will love this), featuring a killer arpeggio laced keyboard break from Matt Guillory.

It’s great to hear Angelica pursue one of her lifelong dreams in recording a pure melodic rock album, and I think her voice is tailor made for the songs at hand. She knows when to go full force in the choruses of "I Am Strong" and "You Will Never Win", but also be very measured and versatile in terms of pitch and emotional display during the verses. This is an album I could hear on the radio at any time and put me in a better mood.

DEEDS OF FLESH – Portals of Canaan