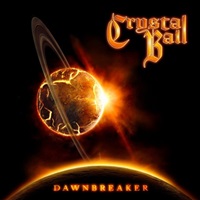 The seventh studio album from Swiss melodic metal band Crystal Ball, "Dawnbreaker" is their first effort since 2007. With two new members in the fold (vocalist Steven Mageney and bassist Cris Stone) the creative break the band took should give the fans some of their strongest songwriting to date. Opening with "Zarathustra", their metal take on the 2001: Space Odyssey theme instrumental, "Break of Dawn" takes over with guitar squeals from Scott Leach and Markus Flury and a steady hard rock groove with loads of melodic qualities in line with bands like Bonfire or Pretty Maids.

An interesting lyrical topic regarding the early air flight days takes place with "The Brothers Were Wright" – I love the play on words in the title alone, and fortunate for the listeners the main riff and chorus are as top notch to make this one of Crystal Ball’s best tracks, along with a lead break that isn’t merely breakneck note frenzy but thoughtful in construction. Other songs that should gain hearty applause for their strong grooves include the good time American hard rock sounding "Walls Fall Down" as well as bluesy highway oriented "Power Pack" with Steven stretching out his personality in the verses to give the band a little bit more bite to the attack.

The main album has 11 tracks, the digipack version listeners will get 2 bonus tracks with a straight forward power number in the Primal Fear vein for "Touch the Sky" and "Bond of Love" which is slightly more commercial hard rock in a Dokken style. Produced, mixed and mastered by Stefan Kaufmann, his choice of tones has that futuristic feel that will remind you of his work in U.D.O. through the years.

"Dawnbreaker" gets the job done on a street level and I think will find favor with many who like melodic metal that’s not too aggressive but has dynamics in terms of tempos.