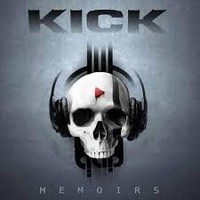 Led by bassist/vocalist Mikey Jones and his guitarist brother Chris, UK melodic rock band Kick have an equal love for the 80’s scene as they do with slight modern splashes on this 11 song "Memoirs" album. A lot of the song structures and hooks possess a lot of Alice Cooper and Def Leppard meets Magnum in terms of a healthy keyboard sound goes in tandem with the guitars and multi-part vocal harmonies.

Even in shorter songs like the 2:48 "Come Back" or "Thrill Seeking Junkie", the band wastes no time getting to the crux of an arrangement, the hook parts front and center with a bit of a spacey-vibe. The drum sound can get a touch boring by track five "Urban Refugee", as the basic 4/4 tempo doesn’t seem to vary much and could have used a little bit more punch/ spirit to liven up some of these songs. Mikey’s voice and phrasing has some of that Alice Cooper snarl with a little bit of Feeder or Foo Fighters alternative bite at heart.

Kick doesn’t live up to its moniker most of the time- so those expecting a high energy melodic rock affair, be prepared as this seems to be stuck in a mid-tempo treadmill that’s difficult to get off. Even though it’s only 40 minutes, my biggest struggle was making it past 3 songs before I wanted to move onto something that grabbed my attention vocally or musically in this genre or something heavier.

For now, "Memoirs" shall be cast off to the side, as acts like Def Leppard, Dokken, or even the Foo Fighters put Kick to shame.